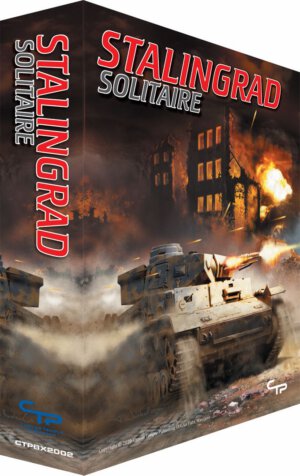 Canvas Temple Publishing is nearing the end of a successful Kickstarter run for a new solo WWII game. In Stalingrad Solitaire, the player is tasked with saving the encircled German invaders during the final fateful weeks outside the gates of the devastated Russian stronghold. The game is – obviously enough – for one player, ages 14+, and plays in two to three hours. The project is nearly 400% funded and you can reserve a copy of the game for a $46.00 pledge through June 8. Expected delivery is January of next year.

Stalingrad Solitaire is a solitaire game simulating the last weeks of the encircled German 6th Army in the pocket German troops nicknamed “The Cauldron” that formed in and to the west of the city of Stalingrad when Soviet troops broke through the Wehrmacht’s front lines in December 1942.

You represent 6th Army’s commander, General Paulus. All actions of the Soviet commander Zhukov and subordinate units are strictly controlled by the game rules. As Paulus, your goal is to save the trapped army in the Cauldron while at the same time cooperating with the high command (OKW) to preserve the integrity of the entire southern front in Russia. Each turn you perform various types of actions within the pocket. Die rolls and rules determine the strategic situation and strategy employed by Army Group South outside the 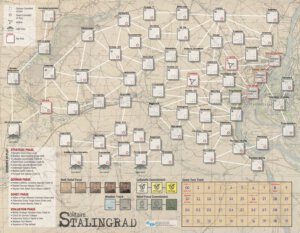 pocket, specifically in terms of the commitment levels of the Luftwaffe (air force) and General Hoth’s relief force.

Each turn represents one to five days, depending on the level of activity. The entire board represents territory approximately 35 by 65 miles. German units typically represent divisions, while Soviet units are officially armies that were usually the rough equivalent of a German division. Each supply point represents about 50 tons delivered per day. Each evacuated wounded factor represents 1500 men.

This war game is big in scope (and lettering) and can be played in a (long) evening. Rather than standard 9/16″ or even 5/8″ inch counters, this game utilizes our custom 3/4″ square counter die to create large, thick counters that are easy to see and manipulate. The base game also contains a map with easy ergonomics, and a well tested game system that approaches its subject with enough abstraction to keep the game tight, but enough detail to do justice to history and create an array of complex decisions.