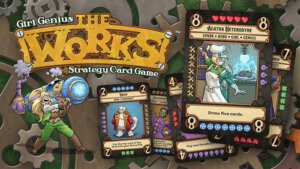 Cheapass Games and Studio Foglio are getting ready to wrap a very successful Kickstarter project to bring an all new edition of the Girl Genius: The Works card game to the masses. Based on the multiple Hugo Award winning gaslamp fantasy comic, this game of advanced planning and pulling off card combos is steeped in all things Girl Genius. Whereas the original game was a single deck, you now have the option of purchasing decks which are each geared toward classic story arcs.

There’s still one week left in the Kickstarter for Girl Genius: The Works and the project is nearly 400% funded. You can reserve a copy of a single deck (you only need one of the decks to play) for $12. Or add the other three stand alone decks for an additional $12 per deck. If you pledge for all four you’ll even receive a special funvelope with extra goodies. Act fast as the project ends April 20th and estimated delivery is September of this year.

Girl Genius: The Works is a game for 2 or more players, ages 12 and up. It takes about 30 minutes to play. 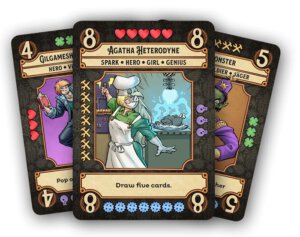 The game is most strategic with 2 players, and can be slightly more chaotic with more. It’s a game of planning ahead and setting up moves for yourself, so with several people it’s better to play in teams, rather than a free-for-all.

The first edition of this game was released in 2001, when the Girl Genius comic was brand new. (It’s an update of an even older card game created by the same team.) That game came in a single 110-card box. Most of the characters hadn’t yet appeared in the story, and some of them still haven’t!

This new edition of the game will have four different 60-card decks, with all-new cards representing a different arc of the Girl Genius story. The decks are: