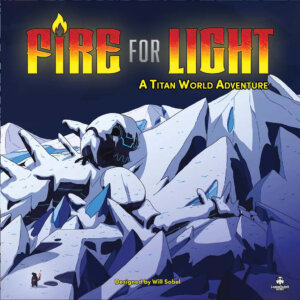 Greenbrier Games have launched a Kickstarter to bring the cooperative science fantasy game Fire for Light to the masses. In the game, players will embark on a multi-chapter journey across a frozen waste. The game is for one to four players, ages 10+, and plays in around 60 to 90 minutes per chapter. You can reserve a copy of the base game, bonuses, and stretch goals for a $99.00 pledge or score all of that plus the two expansions, Red Water Depths and Lichen’s Landing, for a $169.00 pledge through April 11th. Expected delivery is August 2023.

The villagers of Summer’s End are preparing for the coming of Malwinter — a strange and legendary season with the harshest snows and deadly cold. Take control of a new generation of explorers, the most valued members of Summer’s End who go out every day in search of food, materials, or other resources that the village uses to survive:

Fire for Light is a campaign-driven game played out over at least fifteen chapters. During each chapter, you set up a new scenario with new enemies and objectives. Most importantly, players are given choices that will change the outcome of their games and give them access to different rewards or shape future chapters differently.

A chapter is played over several rounds, each culminating in daylight progressing to darkness. Fire for Light uses a unique “Awareness” system to determine which characters (both friend and foe) activate. When an explorer takes their turn, they utilize actions they have available from different sources such as item or ability cards, their explorer mats, or other scenario-specific actions. These allow the characters to move, attack, gather resources, explore the wilderness, or countless other effects. When an enemy activates, they follow behaviors from top-to-bottom and roll a number of dice whenever they move.

Make your choices and uncover the mystery of this snowy world in Fire for Light!