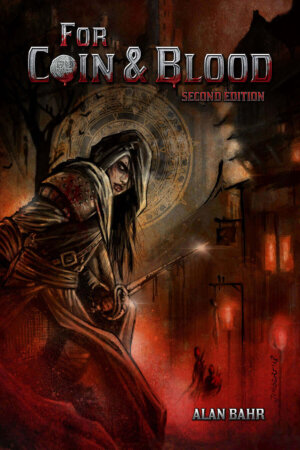 If you enjoy fantasy roleplaying games where you play the villains then you’ll be interested in the second edition of For Coin & Blood, written by Alan Bahr. Gallant Knight Games has revamped the gameplay and expanded on the background of the world as well as added four new classes. You can score the 162 page book through DrivethruRPG for $29.99 in hardcover, $19.99 in softcover, or in PDF for $14.99.

For Coin & Blood is a classically-inspired fantasy roleplaying game, which takes the direction of playing the scum and villains you normally fight inmost fantasy campaigns!

Playing assassins, cult leaders, blackguards and more, For Coin & Blood is a different look at the other side of the coin of fantasy roleplaying games. Inspired by the writings of authors such as Kate Elliot, Joe Abercrombie, Sarah Monette, Glen Cook, Anna Smith Spark, Scott Lynch, and more, For Coin & Blood is dark fantasy roleplaying about antiheroes, thieves and assassins, rooted in the darkest recess of mankind’s depredations.

For Coin & Blood makes no pretenses about what it asks you to be. You’re the villains that other campaigns fight. You’re the cult leaders, assassins, fallen nobles, murderers, mercenaries, necromancers and thugs.
Why a second edition?

Well, there’s a lot of reasons. The first edition was our first “classic adventure” game, inspired by the old fantasy RPGs of the 70s and 80s.

But there were a few places we felt we could improve it after a few years. New content, clearer rules, smoother mechanics. It was Alan’s first dive into that style of game design, and frankly, this new edition is a lot better.

Some of the new things we’ve included:

We’ve also added over 10 pages of art by Ger Curti (which comes to something like 5 half-pages, 4 new character illustrations, enemy art, 20 spot illustrations, and maps!), a new cover by Daniel Jimbert (the cover from the Spanish translation!), a new fiction piece from gaming author Mari Murdock and lots more!