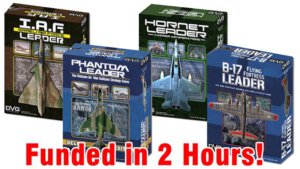 Dan Verssen Games has a Kickstarter currently running to bring four new expansions to the Air Leader series. Right now you can pledge for new gameplay additions to Phantom Leader Deluxe, Israeli Air Force Leader, Hornet Leader, and B-17 Leader. Each expansion is $30.00 (to have retail MSRPs of $40.00) or less – depending on the number you reserve – and you can pledge your support through July 15th. The project is over 400% funded and expected delivery on all four expansions is November of this year.

This Kickstarter includes 4 Air Leader game expansions! You can pledge for any of the 4 products, and/or add any of the 4 to your pledge as Add-Ons.

Phantom Deluxe, Israeli, and Hornet will each  contain NEW Campaigns, Aircraft, Skills, Skill Sheet, Events, Alternate Target Cards, and a Rulesheet on how to use them!

Alternate Targets adds a huge amount of replay-ability to Campaigns! Each Expansion offers an Alternate Target for every Target in their Core game. These represents attacking the Target on a different day or under different circumstances.