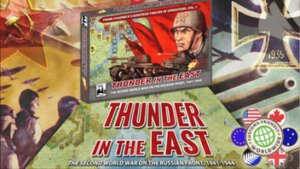 Earlier today Victory Point Games launched the latest design from the legendary Frank Chadwick. Thunder in the East is a monster two player game tackling the epic WWII conflict between the Germans and Soviets. The project has already reached it’s funding goal and you can get on board to secure a copy of the game, plus all unlocked stretch goals, at the $99.00 pledge level.

Thunder in the East is a two-player (although it is easily played solitaire as most wargames are, and it is great for small teams) strategic-level WWII East Front wargame from legendary game designer Frank Chadwick. It has grown from its humble origins in the classic introductory wargame Battle for Moscow to become a Big Game where the focus is on the gameplay and not rulebook exceptions and minutiae.

With Frank’s firm design philosophy of clean, concrete systems emphasizing playability girded by deep historical research, TitE is the first volume in his new ETO (European Theater of Operations) series created especially for players who still remember discovering the joy of their new wargaming hobby and who yearn for the days when playing wargames was pure engrossing fun.

Thunder in the East puts you in command of the great battles raging across the entire front line in six meaty scenarios (of 8 to 13 turns each) and a full Campaign Game that can be commenced or ended at each scenario date. The game scale features Axis Corps and Soviet Army units, with each turn representing one to two weeks (depending on the season) and each hex on the map is 30 miles across.

The sweeping maneuvers, the desperate defenses, the front line parry-and-thrust, and the real history of the war on the Russian Front plays deftly across the map in a wargame designed and tested for the perfect player comfort level. Years of development has shown us that Thunder in the East is a truly fun “classic” style wargame that you will love to play, study, share, and enjoy — one you will keep reaching for on your shelf and will enjoy for decades.