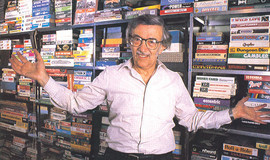 FRED Distribution, publisher of Eagle Games, Face2Face Games, and Gryphon Games is pleased to announce that it has signed an agreement to publish over 30 games from Sid Sackson. This multi-year project will get underway in 2011, with more details to be announced in the coming months.

Keith Blume, Managing Director of FRED Distribution stated, “During the acquisition process of Face2Face Games, Larry Whalen introduced us to his friends with the Sackson Estate, and events really took off from there. We are very excited to continue and expand the work that Larry started with several of Sid Sackson’s games, and it is a real honor to have the opportunity to bring so many of his games back to print.”

In addition to re-releasing Can’t Stop, Buyword, and Sleuth, one of the multi-game projects in the planning stages is a Sid Sackson Legacy Series. This series will consist of several games presented in bookshelf format, an homage to the 3M Sackson releases of the 60’s and 70’s.

FRED Distribution has released 70+ games over the course of almost four years, primarily under its three brands Eagle Games, Face2Face Games and Gryphon Games. Among its most popular titles are Through the Ages, Defenders of the Realm, Age of Steam, Incan Gold, Can’t Stop, For Sale, Brass, I’m the Boss, and Roll Through the Ages.

Sixty years after his first game was published, Sid Sackson (1920-1982) is still considered one of the most important game designers. Not only was he a tireless game designer (almost 100 of his games have seen print over the years) he was also a prodigious writer, writing several books, including A Gamut of Games and the Beyond series, as well as a regular column for Strategy & Tactics. Many of Sid Sackson’s games are still in print today in multiple languages and in several countries around the world.