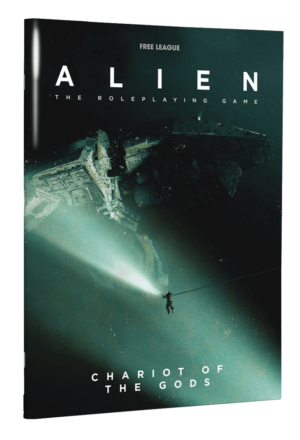 Free League Publishing has revealed the first adventure for the highly anticipated Alien Roleplaying Game will arrive in early December. Chariot of the Gods is a one-shot “cinematic” tale designed to introduce players to the system mechanics while also weaving a horrifying story. The 48 page adventure will carry an MSRP of $19.99 when it arrives on December 10th.

You don’t get paid enough to deal with monsters. But hold your breath, count to three, and play your cards right with this one, and you just might walk away very rich. Oh, who am I kidding? You’re all going to die.

Chariot of the Gods is a complete Cinematic Scenario for the Alien Roleplaying Game written by sci-fi novelist Andrew E.C. Gaska, in which players assume the roles of the crew of the USCSS Montero. The 48-page adventure is designed to introduce players to the game while at the same time taking them on a thrilling, terror-filled ride into deep space where no one can hear you scream. Chariot of the Gods is designed for 3–5 players plus the game master and takes at least 4–5 hours to complete.