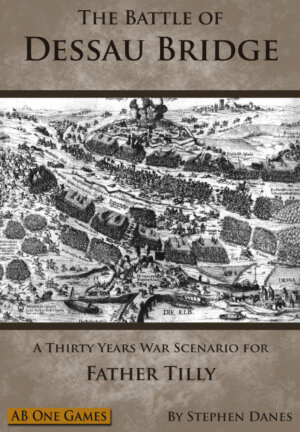 A free Thirty Years War scenario is being offered for the Father Tilly miniatures rules, designed by Stephen Dane. Saber’s Edge brings gamers The Battle of Dessau Bridge, a PDF which includes a map, orders of battle, deployment details and background for an interesting and challenging encounter between old enemies.

Re-fight the battles of the Thirty Years War!

Father Tilly is the first in a series of wargames rules that covers the pike and shot era and is designed to re-fight the battles of the Thirty Years War. The rules are aimed at players with 25/28mm figures to fight both small scale encounters all the way up to larger battles. The mechanics are fast and simple and allow players to quickly resolve shooting or melee with hardly a glance back to the rules. In addition to the rules system, there are a number of cards or war-tokens that players use to complement the action on the table. The skilled use of these tokens allow players to further influence the game play but they also introduce an element of risk: powder explosions, drunken generals, mutinies and looting soldiers are all additional hazards that players have to face. The advantage of using the war-tokens (other than the sheer level of fun that they introduce) is that they allow some of the more unforeseen and random events to occur without clogging up the game mechanics with added lengthy rules. 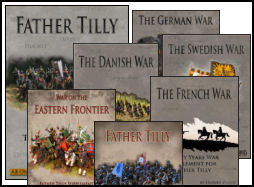 Stephen’s aim when writing Father Tilly was not to write a generic set of Pike and Shot rules that covers three hundred years of European warfare, but rather to concentrate specifically on the fascinating, surprisingly varied, and brutal conflict: the Thirty Years War.

The first supplement, Bohemian Revolt, is included at no additional cost! The first of several planned supplements for Father Tilly, The Bohemian Revolt covers the early stages of the war and includes army lists, generals profiles, a Battle of White Mountain scenario, and additional war-tokens specifically designed for this early period.