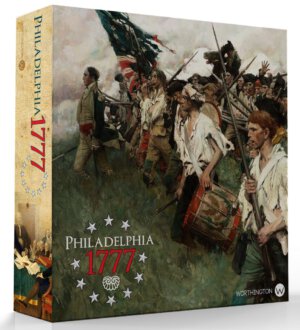 Time is beginning to run out if you’re aiming to crowdfund a copy of the latest fog of war, block game in the American Revolution series from Worthington Publishing. Philadelphia 1777 places one player in the shoes of British general William Howe while the other takes on the challenges of American general George Washington during the redcoat’s push to take the rebel capital. Already past the 200% Kickstarter funding mark, the game is for two players, ages 14+, and plays in 90 minutes to two hours. You can reserve a copy of the game for a $59.00 pledge through October 21st. Expected delivery is April of 2020.

Each turn both the American and British player will receive activation points with which to activate either groups of blocks moved by a leader, or individual blocks. When blocks of both sides end a move in a location together then a battle occurs.

The game has some excellent historical “chrome” mixed in.

There are lots of great strategic decisions for both sides in the game. Best of all it plays in 2 hours so you have time to play two games in an evening.