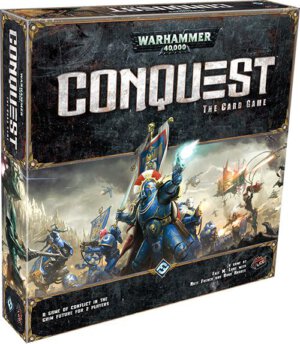 Earlier this week Christian Peterson took to the podium to discuss some of the new titles coming from Fantasy Flight Games and one which is sure to be a hit is Warhammer 40,000: Conquest. The two player living card game delves into the ever popular Games Workshop setting of grim science fiction as each opponent will take on the role of a warlord looking to claim victory in the Traxis sector.

Warhammer 40,000: Conquest aims to capture the flavor and action of miniatures without having to actually use minis… While the initial release in the series will include seven factions for players to choose from, you can be sure FFG will mine the WH40K universe from plenty more choices to bring to the table. The base set is currently scheduled for a Q# 2014 release, carrying a $39.95 MSRP.

In the game, each player controls one warlord and his armies as you engage in interplanetary warfare. Warhammer 40,000: Conquest introduces seven distinct factions: Space Marines, Imperial Guard, Orks, Chaos, Dark Eldar, Eldar, and Tau. Each of these factions possesses a unique flavor and style of play, and an alignment wheel introduces the possibility of forming an alliance between two factions. 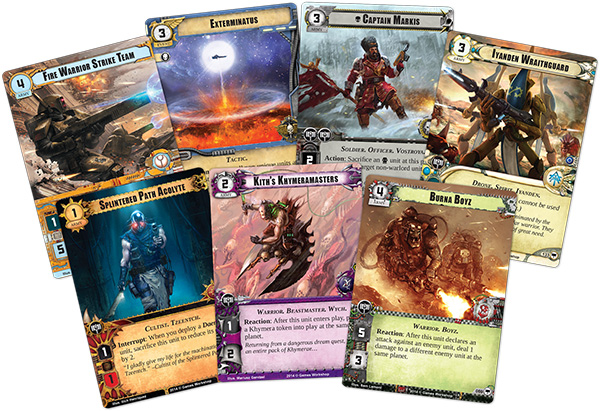