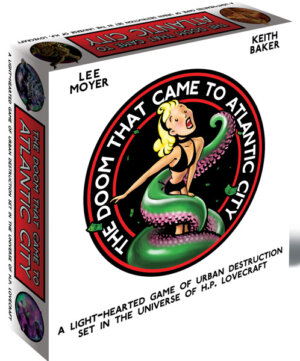 I’ve mentioned before I thought it was a total class move for Cryptozoic Entertainment to jump into a truly disastrous Kickstarter in order to make sure original backers would receive a copy of The Doom that Came to Atlantic City. Now the roll and move game is on it’s way to backers and retailers should have the title in stock in next week.

It came from Cryptozoic! The Doom That Came To Atlantic City was a super successful Kickstarter campaign that was cancelled by its previous publisher. In comes Cryptozoic to make good to all the Kickstarter backers and believers.

Written and designed by Keith Baker with Concept, Art and Design by Lee Moyer and custom pieces by Sculptor Paul Komoda, The Doom that Came to Atlantic City board game invites players to assume the role of one of the Great Old Ones – beings of ancient eldritch power. Cosmic forces have held you at bay for untold eons, but at last the stars are right and your maniacal cult has called you forth. Once you regain your full powers, you will unleash your doom upon the world! There’s only one problem: you’re not alone. The other Great Old Ones are here as well, and your rivals are determined to steal your cultists and snatch victory from your flabby claws! It’s a race to the ultimate finish as you crush houses, smash holes in reality, and fight to call down The Doom That Came To Atlantic City! 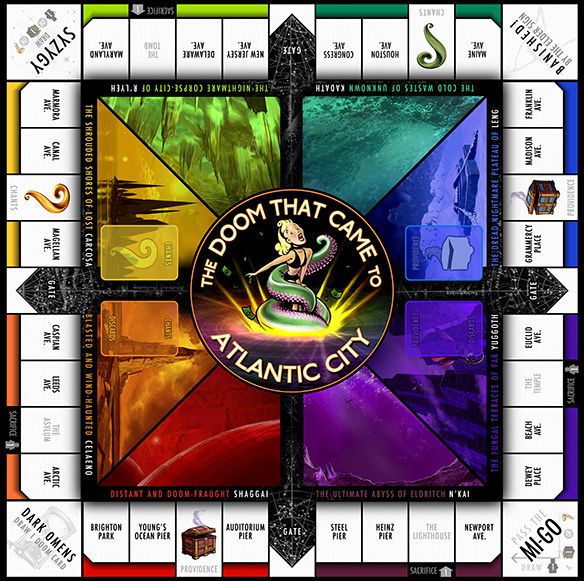