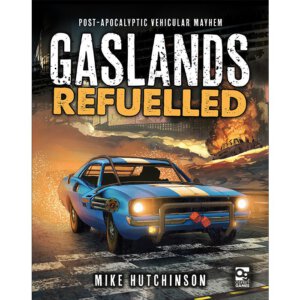 A new edition of the popular Osprey Games post-apocalyptic vehicular combat game, Gaslands, will be heading into stores shortly. Gaslands: Refuelled will provide a slew of new gameplay options for constructing new vehicles, equping your team, designing scenarios, embarking on campaigns, while expanding upon the original game mechanics. The hardcover will arrive on September 19th and carry an MSRP of $30.00.

Note: This piece originally stated Refuelled was an expansion, as the distribution sell sheet indicated it as such.

Shoot, ram, skid, and loot your way through the ruins of civilization with Gaslands: Refuelled, the tabletop miniature wargame of post-apocalyptic vehicular mayhem. With all-new material including expanded and enhanced perks, sponsors, vehicle types, and weapons. Gaslands: Refuelled contains everything a budding wasteland warrior needs to build and customise their fleet of vehicles in this harsh post-apocalyptic future. With a host of options for scenarios, environmental effects, and campaigns, players can create their own anarchic futures.