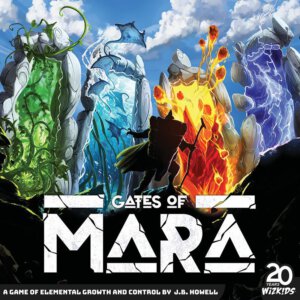 WizKids has revealed a new fantasy themed game for this Fall. In Gates of Mara, players will lead their tribes to try and lay claim to the highest power in the land. The game is for two to four players, ages 14+, plays in 90 to 120 minutes, and will carry an MSRP of $69.99 when it arrives October 1st.

Lead your tribe to the Gates of Mara, portals to realms of pure elemental energy. Encounter powerful Elemental Lords, manipulate intricate economies, and summon colorful magic. Vie for the most influence in each realm so you can establish your tribal claims.

From J.B. Howell, co-designer of the acclaimed Flotilla, Gates of Mara blends upgradeable worker placement with layered area control mechanics. All brought to life by the art of Nastya Lehn. You can lead reptilian Dragonkin, the amphibious Goblins, the insectoid Antids, or the arboreal Elves.

Strategically position your tribe members around the Realms and Gates. Enchant your tribe members to give them new abilities. Compete for short-term objectives, but keep your eyes on your influence. Only the player with the most influence can lay claim to the Gates of Mara!