Arriving just in time for Halloween is Ghosts Love Candy Too from 25th Century Games. In the game, players use ghosts to haunt trick-or-treating kids in order to steal their candy. Ghosts Love Candy Too is for two to six players, ages 8+, plays in 20 to 45 minutes, and will carry an MSRP of $29.99 when it arrives October 19th.

It’s a little-known fact that ghosts love to eat candy. But they can only eat it one night a year…Halloween! On that night, the ghosts travel through the neighborhood looking for delicious candy. Using their best scare tactics, ghosts will haunt the costumed kiddos to steal their sweet sweet candy. But they have to be careful not to scare them away. Ghosts just want a candy delight, not to cause them a fright.

This new edition expands upon the original version with more kids (100 total!), a new “junk” set of treats that you do not want to collect (like toothbrushes, rocks, ketchup packets, pennies, etc.) and new ghosts.

Playing the game is easy. Select one of your ghost cards to bid for turn order. Then resolve by choosing a kid to haunt, taking their candy then using their unique ability. Treats score at the end of the game based on your ghosts specific preferences.

Jeff McAleer
Founder/Editor-in-chief of The Gaming Gang website and host of The Gaming Gang Dispatch and other TGG media, Jeff tackles any and all sorts of games but has a special fondness for strategy, conflict sims, and roleplaying games. Plus, he's certainly never at a loss for an opinion...
Latest posts by Jeff McAleer (see all)
Tags: 25th Century Games, Ghosts Love Candy Too 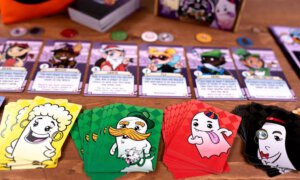 Arriving just in time for Halloween is Ghosts Love Candy Too from 25th Century Games.
0
Awful