The immensely popular Euro-style fantasy game Gloomhaven, from Cephalofair Games, will receive its first expansion this Fall. Gloomhaven: Forgotten Circles will include a new character class as well as more monsters and heroes’ equipment. The expansion, like the core game itself, is for one to four players, ages 12+, and plays in anywhere from 30 minutes to two hours. Forgotten Circles will carry an MSRP of $30.00 when it arrives in October.

Gloomhaven: Forgotten Circles, the first expansion for Gloomhaven, features twenty new scenarios that take place after the events of the original Gloomhaven campaign and involve one new character class — the Aesther Diviner — and her attempts to prevent an approaching calamity. The accompanying scenario book breaks these scenarios up across multiple pages to create more dynamic and surprising encounters.

Jeff McAleer
Founder/Editor-in-chief of The Gaming Gang website and host of The Gaming Gang Dispatch and other TGG media, Jeff tackles any and all sorts of games but has a special fondness for strategy, conflict sims, and roleplaying games. Plus, he's certainly never at a loss for an opinion...
Latest posts by Jeff McAleer (see all)
Tags: Cephalofair Games, Gloomhaven, Gloomhaven Forgotten Circles 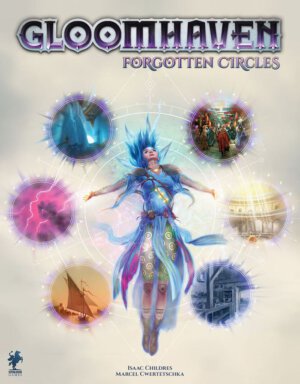