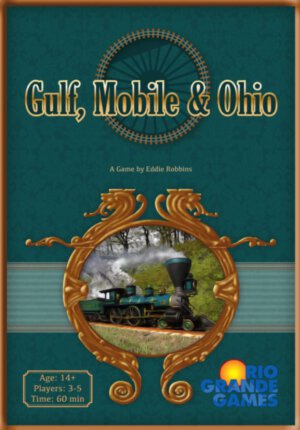 Rio Grande Games and Winsome Games are teaming to bring the 18XX title Gulf, Mobile & Ohio back to print the Fall. The game features three decades of rail line building and speculation throughout the pre-American Civil War south. Gulf, Mobile & Ohio is for three to five players, ages 14+, plays in around an hour, and will carry an MSRP of $39.99 when it arrives in September.

In Gulf, Mobile & Ohio, the third entry in Winsome Games’s Historic Railroads System, players build railroads in the South that existed between 1830-1860, with the game board featuring cities from Richmond to New Orleans, and from Memphis to Savannah. Twenty-three different railroad lines exist in the game, each represented by two shares of stock: a charter share for the player who founds this railroad, and a common share that might be auctioned later in the game. Eight railroads are designated as starting lines, and initially only the shares for these eight lines are available to players. Railroad lines will be represented on the game board with wooden cubes that come in six colors, with the number of cubes ranging from 6 to 32.

Each time you build railroad lines, you score victory points: 1 VP for founding a new line (with three lines being worth 2 VP), 1 VP for placing a cube in a city (2 VP for going into Atlanta), and 1 VP for the first time that a line connects to a line of each other color (which can occur only in cities). If all players pass in turn or the sixth color of cubes is on the board following the chartering of a railroad, the game ends. Whoever has the most points wins!