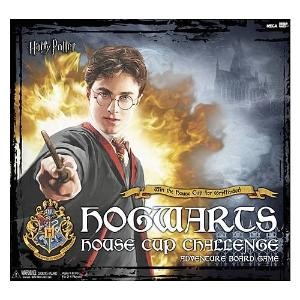 You can now pre-order the Harry Potter Hogwarts House Cup Challenge Game (HPHHCC), which has already sold out of two print runs.  Rumored to be a game with some real strategy and entertaining game play, it might actually be worth taking a look at. As a Potter fan, I decided to delve a little deeper into the game.

So I went to the publisher’s website. Wizkids has a bevy of information about HeroClix, and mentions of Quarriors and Star Trek Fleet Captains and such, but do a search for Harry Potter and you see…nothing. Since I have never received a reply from anyone at Wizkids/NECA, despite repeated attempts to learn more about their games and promote them, I am not sure why I bother. I do like Harry Potter though, so I tried the next source, the developer.

Quixotic Games developed HPHHCC back in 2008, and have developed some other great games, including Ideology and the freshly minted Core Worlds. They actually have some information on the game:

Hogwarts allows 2 – 4 players to portray Harry, Ron, Hermione, and Neville during their quest to win the House Cup for Gryffindor! Throughout the game, players move their characters around the board encountering Adventure Cards and increasing their Knowledge, Skill, and Honor. As the characters’ abilities grow, they will face harder chal 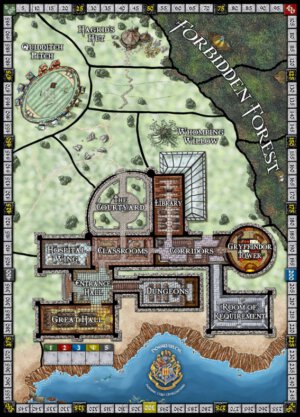 Hogwarts features 100 unique Adventure Cards featuring images from throughout the Harry Potter films. The game also includes an enormous, collectible game board representing Hogwarts and the surrounding grounds. Players move their Characters up to 3 spaces around this game board each turn (without rolling dice), and play Adventure Cards from their hands onto the different spaces on the board.

Hogwarts gives control of the game’s progress to the players. There are no dice in the game, so you can freely move throughout the game world and complete the Adventure Cards in your hand when you are ready to face them. Of course, your opponents can force you to confront certain tasks before you’re ready, and will try to race ahead of you to reach certain Adventure Cards placed directly on the board from the Adventure Deck each turn. You must therefore balance your own carefully laid plans with the need to overcome the challenges put forward by your opponents.