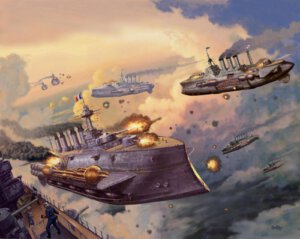 While Catalyst Game Labs has had plenty of success with titles like Shadowrun and Battletech, their steampunk, airborne battleship game Leviathans has been plagued with one problem after another. Originally delayed over a year after it’s initial indicated release date, the small print run did sell out but convoluted rules, long play time, soft mini detail, a lack of new miniatures arriving in a timely manner, and a rather high buy in to get started have led to flagging interest as far as continued support for Leviathans.

Now an update on the Leviathan’s website paints a less than rosy picture about the future of the system. While teaming up with Greenbrier Games could solve some of the current issues the game faces (most notably the company which had produced the miniatures refusing to turn over both the CAD renders and molds) retooling may take so much time that interest will have evaporated. Adding to this Catalyst has plenty of lines, which are immensely popular and sell extremely well, man hours have to be devoted to leads me to believe Leviathans is as dead as Nelson…

Been a number of months since the last update as we’ve continued to investigate how to proceed with Leviathans. And the conclusions we’ve come to at this stage is there simply isn’t a short-term fix.

First, new CADs/renders of every ship are required. The company that previously produced the miniatures also generated the CAD/render work for us and they won’t turn those over. So not only is that a re-investment into the game again, but until very recently it was expertise we’d spent literally years trying to achieve with little to no luck.

Second, new molds are required. Once again, the company that produced the miniatures won’t give over the molds. So we have to invest into new molds. And molds like these can be $4k for a single ship.

Finally, the big box presentation simply didn’t work over-all. Yes, we sold through everything, which is fantastic! But it was a relatively small print run and the cost of the box to produce vs. how much we make leaves little on the table; not to mention how long it took to publish the first time around and it really only covered itself.

What’s more, the big box is intimidating in size and price, acting as a barrier to new players, while game stores have mentioned struggling to find a location to carry more than a single box. Hence why I previously mentioned we’re still heavily looking at a Star Wars: X-Wing and Wings of Glory model (though all the above still applies even in a new presentation).

All of those elements we’re trying to juggle and at the end of the day it comes down to two things:

1. We could print 5 to 8 boxed games of various type and size for the investment into trying to just re-launch Leviathans.

2. At the current time we still don’t have the expertise to render the miniatures ourselves and ensure the company we’re working with won’t hold molds (or even the game, as happened) hostage.

Where does that leave us? It leaves Catalyst still completely committed to Leviathans. We absolutely love this universe and the game and feel it can and will find an audience. But to solve the two primary issues above, we simply have to take longer to get it out then we wanted.

First, by getting out those 5 to 8 boxed games above we can broaden the company’s footprint and build up the necessary warchest to then move up to a “next level” commitment like what Leviathans requires.

Second, and by far most importantly, we’ve recently begun working with Green Brier Games to produce miniatures, with renders done in conjunction with Catalyst and totally under our control. As well as using their expertise to help us walk through the production process on miniatures from start to finish.

I just outlined this in a huge way in an update about Sprawl Gangers, our Shadowrun miniatures game. In there I talk about how we’re currently working on “Shadowrun RPG Miniatures”, releasing a pack of 5 miniatures at a time. A grand experiment to ensure that the quality vs. quantity vs. investment vs. experience/expertise all works out. This will lay the groundwork for us to being able to fully move into Sprawl Gangers.

However, it will also allow us to fully move on Leviathans as well. As for a time frame…I’ve got a tentative pencil of “summer 2015” for a new launch of Leviathans with new factions, the rulebook as a stand along book, and a whole bunch of other cool ideas. However, there’s a lot of work between now and then.

I completely understand if some of you decide that enough is enough and you don’t want to stick around any more. Regardless of our failure to further support the line, we put out a fantastically fun game and a cool universe and we’re incredibly proud of the game you can still play as often as you like.

For those willing to be patience still, I hope very much to see additional factions and their cool ships and abilities reaching gaming tables at some point in the future.

Thanks for your continued support and enthusiasm! We Freed Taiwan once…I expect to do it again….

Score Big Savings with the Battletech: A Time of War RPG Bundle

Dive Unboxing and First Look on The Gaming Gang Dispatch #666