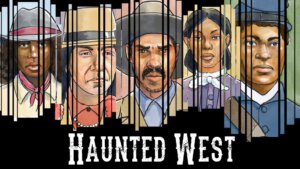 An RPG which many of us have eagerly been anticipating arriving on Kickstarter launched last Friday for Chris Spivey and Darker Hue Studios. Haunted West provides gamers with a far less whitewashed and “Hollywoodified” look at the American Old West while also laying out plenty of inspiration for a creepy and dark Weird West setting as well; I can’t say this for certain but I have the impression you can use this system for a very realistic approach to the Old West genre or go all out with a gonzo mix of horror and steampunk if you’d like. The project has already passed the 250% funded mark and you can reserve a copy of Haunted West in PDF for a $20.00 pledge or score the physical book (and PDF) for a $55.00 pledge through November 1st. Expected delivery is July of next year.

One moment sets the course of destiny.

But what if that one moment was changed in the smallest of ways?

What if one madman’s plan actually were to succeed beyond our known history? 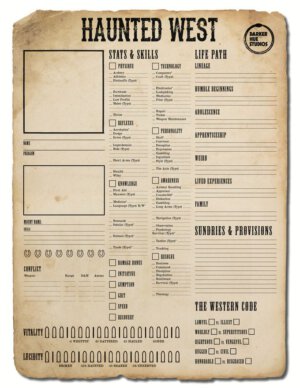 Haunted West, A Historical-Fiction, Weird-Western, Spaghetti-Action Game.
This is a game about hope through struggle. It is a game that pieces together the stories of the largely forgotten people of the Old West, the people who have been whitewashed by history. Discover the American experience in the Weird West.

Grab your rifle, jet pack, and spurs to battle traitorous rebels in the defense of freedom, join the fight against temporally displaced dinosaurs, rustle cattle to make ends meet, and hijack a train full of illicit Confederate gold!

I hope you’ve got the grit and gumption to see this through.

Haunted West honors the many forgotten voices of the American Frontier, tips its hat to the Weird West genre, rides the trails with the Spaghetti and Hollywood Westerns, and drinks at the saloon with historical truths. It’s a game about our real-world history that does not whitewash it, but instead amplifies the voices that shaped the West, and thereby America, helping define the world. We’ve taken an entirely new approach to the Weird West genre in gaming, with a system built from the ground up to enable you to tell the kind of stories you want, and accurately represent the history of the Old West while running games as gritty or as pulpy as you want.

Haunted West approaches the Weird West in a unique way, riding the rails toward something new. This is fertile ground for all. Haunted West explores the true history of the American Frontier with a focus on the tales of the forgotten, unknown, and overlooked, and all through Weird-West-goggles.