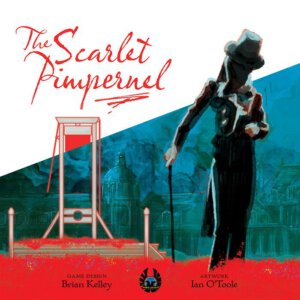 Eagle-Gryphon launched their latest Kickstarter and this time out it’s a board game based on the classic tale, The Scarlet Pimpernel. In the game, two to six players take on the roles of agents assisting the mysterious hero as they try to complete missions and save the innocent from the guillotine. The Kickstarter project is already well past 300% funding and you can reserve a copy of the standard edition for $55.00 or the signature edition for $75.00, through February 13th.

I have to say the game looks really intriguing but I’m surprised Eagle-Gryphon didn’t provide various stretch goals to receive the items in the signature edition. Instead the company simply tacked on an additional $20 to the price tag. A bit disappointing in my opinion…

The year is 1793. France cowers under the Reign of Terror, and not even the innocent are safe from the Committee of Public Safety and their precious guillotine. In the midst of this turmoil, one man uses courage and cunning to fight the brutality: The Scarlet Pimpernel.

Along with his League of followers, The Scarlet Pimpernel rescues the innocent from under the very noses of the Committee, leaving behind only a card showing a small pimpernel flower. The man behind the rescues, Englishman Sir Percy Blakeney, must keep his identity a secret from all but his closest associates.

In Scarlet Pimpernel, you play as members of the league helping the Scarlet Pimpernel accomplish seven missions, rescuing the innocent from the guillotine. No mission will be as important as the last, for you save the young Dauphin, heir to the French throne, by whisking him away to Vienna.