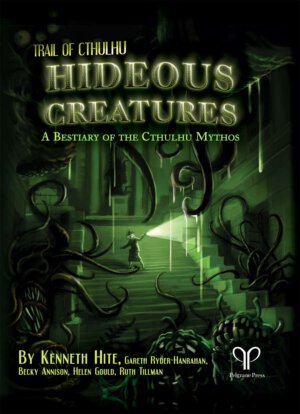 Pelgrane Press has released the impressive Hideous Creatures: A Bestiary of the Cthulhu Mythos in PDF. The massive tome brings a multitude of new angles to a variety of Lovecraftian creatures of lore for any Mythos roleplaying game. The 360 page PDF is available right now at DriveThruRPG for $25.00.

Lovecraft created his various “shadowy congeners” because the stories of vampires, werewolves, and even ghosts had become too familiar and too formulaic to evoke true horror. Almost a century after he wrote, his own monstrous races have likewise begun to seem like comfortable story furniture rather than unnerving signals that the world is horrible and wrong.

In Hideous Creatures: A Bestiary of the Cthulhu Mythos, we present a comprehensive look at Lovecraft’s hideous creatures, from as many angles as we can. Our goal is contradiction, surprise, and most especially the uncanny: the recognition of something familiar as something weird. As in the “Gods and Titans” section of the Trail of Cthulhu core book, this book deliberately contradicts itself, blurring boundaries and erasing certainties in the name of the uncanny. In your campaign, these variant truths might be misunderstandings, legends, heresies, or deliberate lies spread by the creatures to lull their foes into a false sense of familiarity.

Hideous Creatures: A Bestiary of the Cthulhu Mythos is the Trail of Cthulhu bestiary written by Mythos giant Kenneth Hite and fellow experts Gareth Ryder-Hanrahan, Becky Annison, Helen Gould and Ruth Tillman, in the tradition of the award-winning Book of Unremitting Horror and the 13th Age Bestiary. Useable for any mythos or occult RPG, creatures are not just antagonists to fight or flee from; they are entire adventures by themselves, leaving physical traces, occult clues and madness in their eldritch wake.

Plus full write-ups of nine Foul Congeries, opening the books on Lovecraftian monsters that have never taken stat-block form before in any game!
Bat-Things * Black Winged Ones * Gaseous Wraiths

And new art and in-world documents for each of the fifteen original Hideous Creatures:
Byakhee * Dark Young of Shub-Niggurath * Deep Ones 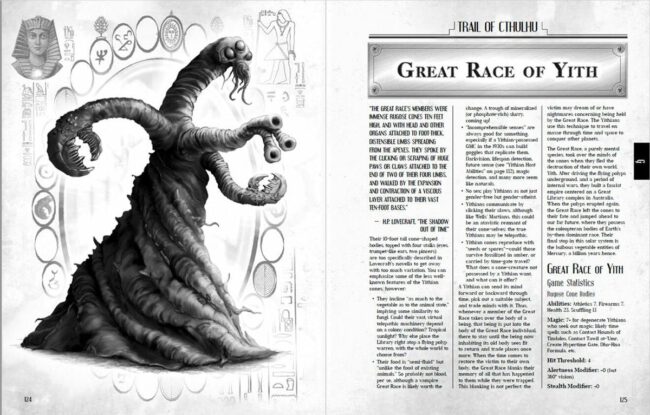