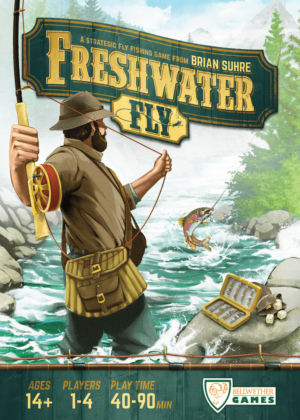 Following a successful Kickstarter, a uniquely interesting looking board game is on the horizon from Bellwether Games. In Freshwater Fly, players will compete to catch the most fish and complete the most achievements by way of dice drafting and set collecting. The game is for one to four players, ages 14+, plays in 40 to 90 minutes, and will carry an MSRP of $49.99 when it swims into stores this November.

Freshwater Fly is the second standalone game in a series from designer Brian Suhre that integrates modern game mechanics with the surprisingly rich and uniquely refreshing world of angling. In Freshwater Fly you will encounter a rushing mountain stream teaming with fish, armed solely with a rod, reel and selection of flies. To catch fish and earn valuable achievement points you will need to carefully perform a series of tactical maneuvers while executing a deliberate and evolving strategy.

Begin by examining the ever-changing hatch in the current, and tie a fly to match your target fish at just the right time and turn of the river. Then choose to cast upstream to drift your fly with the current and gain extra bites on your line, or push your luck with a pinpointed cast for the perfect catch. In either case, it is wise to cast near rocks to boost your skill and uncover new fishing techniques, while keeping your supply of finesse charged for the next challenge. Your rondel reel, which physically spins, provides you different 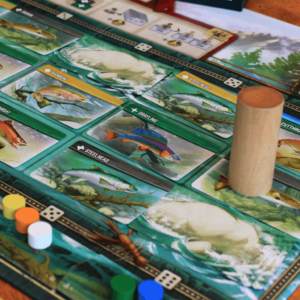 bonuses as you draw in your line, depending on how aggressively you choose to fight the fish you’ve hooked. Applying drag, for instance, will negate the fish’s strength, but leveraging your momentum could provide you a unique action to set you up perfectly for your next cast.

At its core, Freshwater Fly is a dice drafting and set collecting game, with elements of creative puzzle solving and pushing your luck. Each turn you select one die from the dice pool and assign it an action that relates to the particular fishing maneuver you want to take. Higher valued dice typically earn you more powerful actions, but accumulating lower dice totals can earn you free turns. The dice you select will also unlock or multiply various bonus actions you can use to solve the most stringent fishing puzzles in unique and rewarding ways.

The sets of fish and flies you collect will help you achieve personal and common goals, but to obtain victory you must focus on those goals which overlap in the most valuable ways, while not falling behind in your total fish count. The game ends when a single player catches a seventh fish, achievement points are awarded, and the winner is declared.