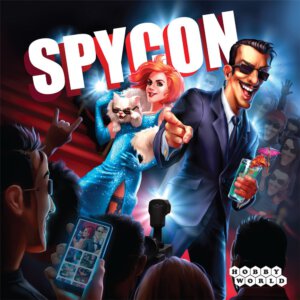 Russian game company Hobby World will be releasing a secret agent-centric party game next year. Spycon place the players in the roles of two parties of convention goers who are attempting to determine who is the spy they’re trying to contact or eliminate. The game is for four to ten players, ages 12+, and plays in around 30 to 45 minutes. There’s no precise release date or MSRP just yet.

Welcome one and all!

Spycon, the largest super spy convention in the world, is in full swing! You are here to get a precious piece of secret information, but there is a complication: everyone is wearing a costume, and you don’t know who your source is. Find your Spy by listening and talking to the visitors, but you have to remember: the interceptors are there, and they might get ahead of you and unveil your Spy before you do!

Spycon is an outstanding storytelling detective party game, where players split into two teams and take turns being the Spy. The goal of the Spy is to make their own team guess which costume they are wearing in such a way that the opposing team wouldn’t get it. In order to do this, the Spy and their team will use a special Keyword as well as their quick-wittedness, limitless fantasy, subtlety and impressive talent for mingling.

In Spycon, the most creative and ingenious team wins, so most importantly — stay on your toes!