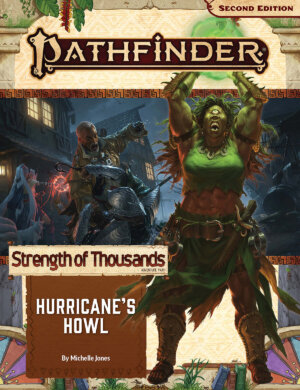 The Strength of Thousands adventure path continues with Hurricane’s Howl, which sees player-characters step into their roles as teachers of the Magaambya and pits them against the Knights of Abendego in a desperate bid to save innocents from a grisly fate.

One of the most remarkable aspects of the Strength of Thousands adventure path is the way the writers and developers are able to tap into the hallmarks of the magic school trope and into the real-life shenanigans many players will have experienced in their high school or college years. With the players’ ascension to Lore Speakers at the conclusion of the previous chapter, Hurricane’s Howl marks a distinct change in the tone and narrative style as the students have now become teachers — and must plan lessons, bond with students, and conduct practical research to advance their careers. 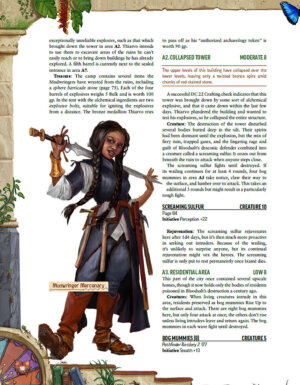 If the phrase “publish or perish” comes to mind, you wouldn’t be alone.

To be clear, the adventure and character writing are still excellent. There’s new student NPCs and the chance to connect ore deeply with friends from prior chapters. Players take an even more prominent role in shaping the experience as they prepare for and conduct classes and there is certainly a greater emphasis on more traditional adventure elements. There has been no drop in quality of narrative, of excellence in worldbuilding, or in the impact of player choice and curiosity.

The flavor of the adventure, however, has certainly changed. Anyone who has ever gone to graduate school or labored in the strangeness of modern American academia will immediately recognize the shift that comes with progressing beyond student status. The thrill isn’t gone, but the demands of research and teaching do not carry with them the same delight as the joy of learning — a point driven home by the necessity of research in professional progression.

Progression itself becomes a more prominently thorny matter in this outing as well. Unless GMs are committed to truly crafting a school campaign, the idea that characters who were so recently novices are now teachers makes the narrative feel rushed. The concept of students –even new students—accomplishing multiple extraordinary feats within a brief period of time is by no means atypical for the genre, progression to professor status doesn’t quite feel earned here and weakens the overall integrity of the storytelling.

All of that being said, Hurricane’s Howl offers players a chance to be heroic on a larger scale and to combat real evil in the world at large. The Magaambya and Nantambu are wonderful staging grounds for newer heroes, but it feels fitting for characters to be farther afield, especially given the idea that they are now wizened mages with students and research interests. 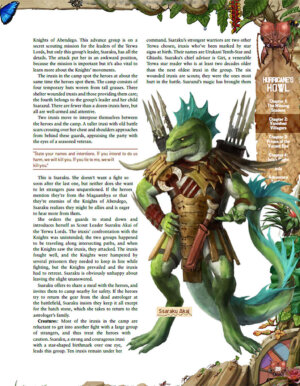 The actual matter of play, however, may also be a challenging one as the adventure finds itself between two distinct ludonarrative impulses. Doing battle with the Knights is more likely to appeal to fans of more traditional Pathfinder adventures that tend to emphasize combat and exploration; conversely, these are also the players the most likely to be put off by the inclusion of the more academic elements. Finding a smooth way to transition between these elements is a challenge for any designer, but it’s made even more difficult here by the six-act structure of the overall adventure path.

Hurricane’s Howl –and, by extension, the entire Strength of Thousands adventure path– does not want for compelling story hooks, lovable NPCs, gorgeous worldbuilding, or innovative gameplay elements. If anything, the texts practically burst with them. It’s clear the team at Paizo has set out to do something new and ambitious and they deserve ample praise for it. The problem becomes that they have done so much that, as the adventure path goes on, much of it loses its room to breathe and feels rushed. The story has all the makings of a wonderful coming of age arc for a group of young mages dedicated to making a difference in the world, but it’s so compacted that narrative milestones begin to lose their weight.

Hurricane’s Howl may not be as strong an entry as its predecessors, but it’s not for a lack of novel ideas or interesting storytelling. Those who are already invested in the storyline will still find good progression and those who are drawn to the world will find it much expanded. GMs interested in a long-term school campaign will also find ample inspiration here, particularly in meaningfully scaling challenges as players progress.