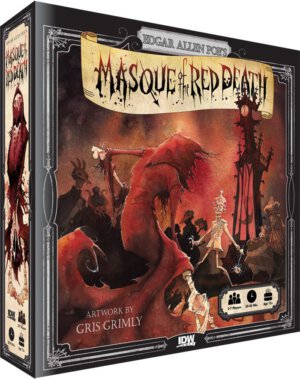 With art from Gris Grimly, this marks his first tabletop game, allowing his art to cover the cards, boards and game pieces all incorporating his unique style which captures the tone of this sinister story.

Based on Edgar Allen Poe’s story and Canadian Game Design Award Finalist, Masque of the Red Death pits you and 4 to 7 players against each other as you hobnob with the Prince. But disaster strikes at midnight! Players have to balance their actions carefully between currying the Prince’s favor and discovering what rooms the Red Death will visit. After all, the highest social standing only matters if you survive.

Jerry Bennington, VP of New Product Development, said “Gris Grimly has done an incredible job of creating the tone with his fascinating art style and understanding of the story being told. Partnered with Adam Wyse’s thematic game design, this game is sure to give players a wonderful experience fitting right into Edgar Allen Poe’s world.”

Planned as a Kickstarter, this social deduction game of popularity and danger, Masque of the Red Death will be launching on January 10th2018 and will be available in stores soon after fulfillment.