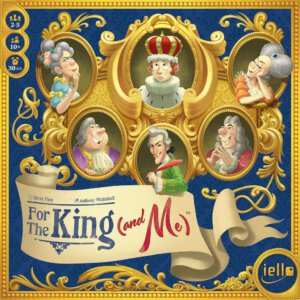 Iello will be releasing a rethemed edition of Biblios this summer with For the King (and Me). In the game, designed by Steve Finn, players will both collect and bid on cards to become the most valuable advisor to the King. The game is for two to five players, ages 10+, plays in around 30 minutes, and will carry an MSRP of $24.99 when it arrives in late July.

The young monarch has no knack for governing. Take advantage of this by taking on all the most prestigious government duties! Share cards, choose the most high-profile jobs…then experience an auction phase as belligerent as it is clever!

In For the King (and Me), you wish to become the most valuable minister by collecting the right cards while lowering the value of your opponents’ objectives. The game plays the same as the designer’s earlier game Biblios, while allowing for play with up to five people at once.

The game lasts multiple rounds with players first collecting cards, then bidding for cards. During the collection phase, as the active player you draw cards one at a time, keeping one for yourself, placing one in an auction pile, and placing the others face up for the other players to draft. Once you take a card, you can’t take another, so sometimes it’s a tough call to decide when you want to take something. Once you’ve had multiple collection phases, the cards in the auction pile will be auctioned one by one.

Some cards are worth points depending on their color, some are worth gold, and some allowing you to manipulate the value of the various colors. Once all the cards have been auctioned, players reveal their hands and tally their points to see who wins.

Tags
For the King and Me Iello Steve Finn

Family Friendly Board Game Little Town has Arrived from Iello