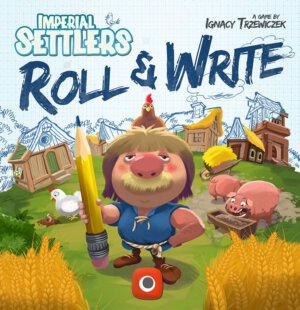 The latest title in the Portal Games Imperial Settlers series has arrived in stores today. In Imperial Settlers: Roll and Write, players will compete to build their engine to power growth of their empire while there’s also a solo mode which adds new wrinkles. The game is for one to four players, ages 10+, plays in 30 minutes, and carries an MSRP of $29.99.

Imperial Settlers: Roll & Write is a standalone game set in the universe of Imperial Settlers and Imperial Settlers: Empires of the North. The game is heavily focused on engine building! Constructing buildings grants you a special bonus, and with each passing turn the game offers you more choices as your empire gains momentum.

Imperial Settlers: Roll & Write has two game modes. The standard mode is a 2-4 player competitive challenge in which you try to gain more points than your opponents. The adventure mode for a single player offers 48 unique game sheets. Each sheet presents unique challenges and gameplay as players have different buildings at the start. Tweak your engine and get as many points as you can! Grab your pencil, roll your dice, and create the most prosperous empire!