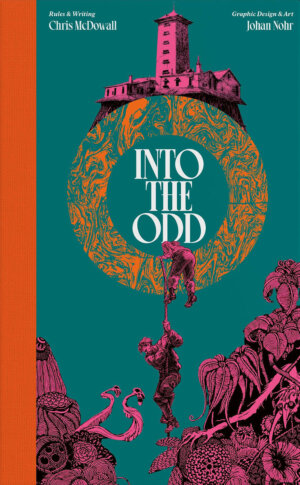 On the heels of a successful Kickstarter, Free League Publishing will be releasing Into the Odd Remastered in the very near future. The popular rules light take on the OSR gets plenty of new content. The new edition will be available in hardcover and PDF later this summer.

Bastion is the only city that matters. In its industrial age, it sits as the smoke-shrouded hub of mankind, surrounded by a world of lurking horrors and cosmic interference. The Underground spreads beneath our feet and the stars loom above.

You are an Explorer, braving places too far for maps and too old for records. Your expeditions touch the bizarre, wondrous, and horrific. You search for riches, but also Arcana, mysterious devices with unnatural powers.

The remastered version of the 2014 TTRPG revisits Industrial Bastionland, giving the original Into the Odd a lavish hardback, full-colour restoration with expanded content.

The book is written by Chris McDowall (Electric Bastionland) with graphic design by Johan Nohr (MÖRK BORG) and printed and distributed by Free League Publishing.

Save Big with the Mutant Year Zero 2 Bundle of Holding