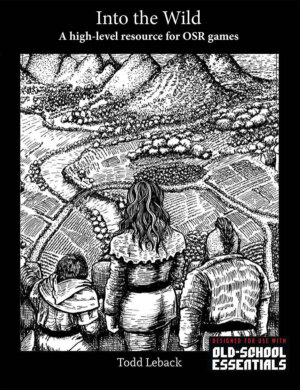 Third Kingdom Games have released a new Game Master sourcebook aimed at Old School Essentials and other OSR themed RPGs. Into the Wild tackles wilderness hexcrawls with plenty of tables and advice to boost your creativity. The 221 page book is available at DriveThruRPG as a hardcover for $34.75, softcover for $30.25, or in PDF alone for $12.00.

Into the Wild is written for Old School Essentials but can be easily adapted for use with any OSR-style game. It combines and expands on six books by Third Kingdom Games: Classing up the Joint, Domain Building, Hexcrawl Basics, Random Weather Generation, OSR Expanded Classes, and Wealth by NPC level.

Designed to be used alone or as a companion book to Filling in the Blanks and a Guide to Thieves’ Guilds, Into the Wild provides guidance for high level play. From exploring the wilderness to founding a domain, creating new classes for OSR games, and more. All of the artwork was commissioned for the book. The rules from the aforementioned six books have been revised and integrated into a coherent whole, with plenty of examples of how it works in play. Additionally, Into the Wild contains:

*Random encounter tables designed to populate wilderness lairs, not just create random encounters.
*A simple mass combat system designed to be used to resolve everything from large-scale pitched battles to large encounters in the wilderness for when you don’t want to roll one hundred attack rolls.
*Two pages of unit tokens for use with 1″ battlemats and the mass combat system.
*Example settlements and strongholds that are blank to be filled in by the Referee and used as needed.
*Domain tracking sheets by James V West.
*and more!