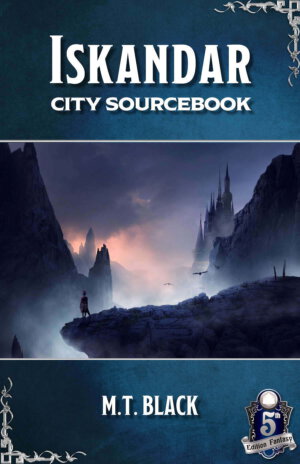 Popular author M.T. Black has a new sourcebook available for 5th edition Dungeons & Dragons. The Iskandar City Sourcebook promises a wealth of information to bring the City of the Shining Spires to your game table. The 112 page sourcebook is available in PDF at DriveThruRPG for $4.95.

Explore a wondrous new city in this sourcebook for the world’s greatest roleplaying game!

Iskandar! City of the Shining Spires! Where merchants are masters and coin is king, but thieves and assassins rule the night. Where gods and priests walk side by side even as unspeakable wealth peers down upon crushing poverty. Where guilds and great houses spar for political supremacy while fiendish hordes muster just over the horizon. Iskandar! Home to all that is wondrous, noble, and laudable, and to all that is lewd, wanton, and vile.

Iskandar City Sourcebook offers an in-depth description of this superb new fantasy city. Alongside the setting lore, this guide is packed with content that can be used in any Fifth Edition game, including:

Welcome to Iskandar, the greatest city in the world!