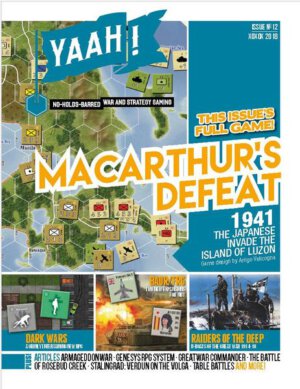 Flying Pig Games is now taking orders for the upcoming twelfth issue of Yaah! magazine. Yaah! tackles strategy gaming with a heavy helping of wargaming action, while also including a complete game in every ish. Now you can score a special price of $29.00 for the newest issue, hitting in Q1 of 2019. I even included a look at issue eleven on yesterday’s episode of The Daily Dope for those who aren’t familiar with Yaah!

Crazy, over 25% off, preorder price. We want you to read and game what we feel is one damn fine boardgaming magazine. So, we priced Yaah! 12 at the lowest preorder price in Flying Pig’s history. Just $29! Read below to see what you get. This is a preorder. The magazine and game will ship in early 2019.
Do you need a gaming break after the long, hot, stormy months of summer? Issue 12 of Yaah! is just what you need. Also note that Yaah! is just what you need even if your summer wasn’t long, hot, and stormy – because we’ve got an issue loaded with reviews and other bits to suit every conflict gaming taste – plus a full game packed in for good measure.
This issue’s complete game is “Macarthur’s Defeat”, designer Arrigo Velicogna’s take on the 1941 Japanese invasion of the island of Luzon. It features a full sheet of 176 counters and a 22 x 17 game map that includes an inset area map of the Bataan peninsula.
If you need a little vacation from yourself, Yaah! 12 has you covered with articles on two new RPG systems: Brad Smith gives us a quick take on Mark H. Walker’s Dark wars RPG, while Eddie Carlson has a review of the Genesys role-playing system from Fantasy Flight Games. 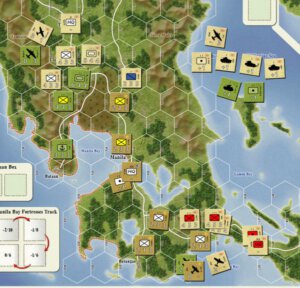 Hexgrid warriors need not fear, however, because the rest of the magazine is devoted to happy, shiny cardboard carnage. Game designer Greg Porter offers his insights on Flyng Pig Games’ new Armageddon War. John Burtt delivers a couple of in-depth reviews: A look at both Stalingrad: Verdun on the Volga from Last Stand Games and the new edition of The Battle of Rosebud Creek from Legion Games.
It can’t really be 2018 without including some coverage of world War I, so Roger Leroux pens a review of Hexasim’s Great War Commander, while Nick O’Neill gives us a look at Raiders of the Deep from Compass Games. Norm Lunde moves things back to a more modern setting with his piece covering the BAOR and FRG expansions for GMT’s MBT (try typing all of that really fast…), and Matt Foster rounds out the lineup with a look at Hollandspiele’s Table Battles.
Yaah! 12 is a thick 80 pages of gaming wonderfulness that you can’t live without!
This is a preorder. The game and magazine ship in early 2019.
Tags
Flying Pig Games MacArthur's Defeat Yaah Magazine