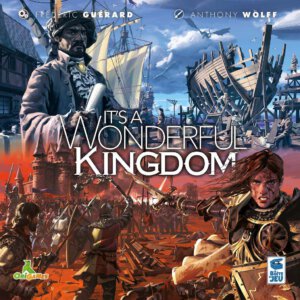 French game publisher La Boîte de Jeu is nearing the end of a very successful crowdfunding run for Frédéric Guérard’s latest design. It’s a Wonderful Kingdom can be played solo or with two players as the throne is up for grabs to whoever has the strength to take it, in a low fantasy game setting. The game is for ages 14+ and plays in around 45 minutes. The project is over 1000% funded and you can reserve a copy of the game, plus non-Legend stretch goals, for a $37.00 pledge through May 6. Expected delivery is next January.

In It’s a Wonderful Kingdom, you’ll play as a Duchy looking for power. The empty throne of the former Monarch calls for a legitimate heir. Fight for your place at the head of the Kingdom. You’ll have to choose the path of your future to enhance and grow faster and bigger than your opponent. Expand the production of your Duchy, trap your opponent, and access to the throne of this Wonderful Kingdom.

It’s a Wonderful Kingdom is a standalone solo or 2-player game in a Low-Fantasy universe.

Inspired by the core mechanics of its predecessor “It’s a Wonderful World”, this new game offers more interaction, a bluff mechanism and new challenges.

The game is played using modules, each different and offering mechanical twists. Each game, players will choose one of the different modules to compete against each other.

The game is divided into 4 rounds. Each round having 3 phases.

1/ Split & Trap
Players take turns placing their cards on two piles at the center of the table.
One player picks 2 cards from his hand and place it either on the same pile, or split it among the two piles. The other player chooses a pile. This step is repeated alternatively until the players have placed all the cards from their hands.

Furthermore, each player has 2 Trap tokens which can be used to place face down cards.

2/ Planification
Each player chooses, for the cards he has collected, which ones to build and which ones to recycle in order to accelerate the development.

3/ Sequential Production
Each player produces the resources of his Kingdom in a sequential way. The resources being produced in a certain order, it is necessary to anticipate the sequences to optimize the production and development.

At the end of the 4th round, the player with the most victory points wins the game. 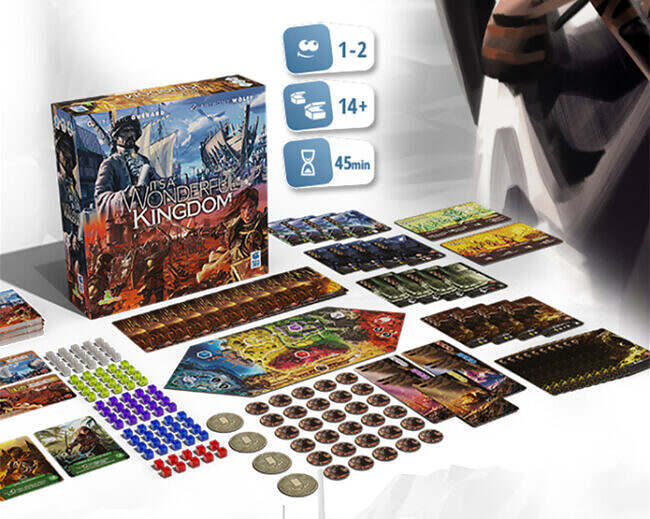