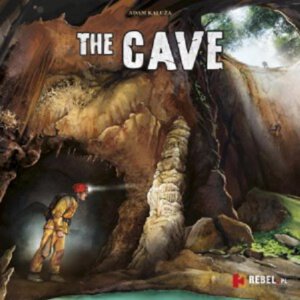 Ready to be a speleologist? Now Available from Rebel Games is The Cave for 2-5 players at a retail price of $42.99.

The Cave is a board game in which players take on the roles of speleologist teams, who are going to explore a newly discovered cave. Players start from a base and explore a cave tunnel after a tunnel, effectively building the cave (the board). They have to overcome steep descents, underworld lakes and very narrow passages. They will be given a chance to admire wonders of the underground like halls full of stalactites.

To make it all possible they must take right supplies with them, like ropes, oxygen and batteries. Many times they will have to go back to the base to plan a next move and replenish resources. When the cave is fully explored, the player, who made the biggest effort in the most spectacular way, wins the game.

Each turn players have five action points to use for moving, discovering new cave tiles, exploring them, and packing their backpacks when they go back to the starting base. They need ropes for descents, oxygen to explore underwater parts, and a camera to photograph underground wonders. Planning what to take with them is one of the most important things in the game. Each turn that their pawn is not in the starting base, players must use (i.e., throw out) one basic supply from their backpack; these costs, along with the expenditure of other supplies during exploration, forces them to return to the starting base a few times during the game. To keep them from having to carry everything, though, players can raise a camp somewhere in the tunnels where they can store some of the equipment.

The cave differs every game, so players have to be prepared for everything or they will lose time. Players earn points for exploring different tiles: underwater, wondrous, descents, and so on – but to win they’ll need to acquire bonus prizes for exploring the most tiles of each type. This make decision-making during trips very difficult.

When the cave is fully explored, the player who made the biggest effort in the most spectacular way wins the game.