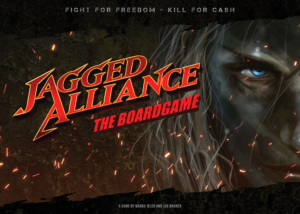 If you were a fan of the Jagged Alliance series of PC games then you’ll probably be excited about the new miniatures driven board game from Modiphius Entertainment. In Jagged Alliance: The Board Game (no bonus points for originality there), players will cooperate using their hand picked mercs to bring down dictators and their henchmen. The game is for one to four players, ages 14+, plays in 45 minutes to a few hours, and carries an MSRP of $91.99.

Jagged Alliance TBG is a co-operative board game with miniatures allowing you to take the role of your favorite Jagged Alliance mercenaries to battle Deirdranna and her minions in a game with uniquely variable combat tactics.

​With its modular map tile system and scenario creation and flexible progression, Jagged Alliance allows for brief skirmish games or evening-spanning campaigns and allows you to build your own scenarios as well!

Players can add extra movement and improve their odds of hitting in combat by spending fatigue or damaging weapons for greater effects. Mercs can then rest and repair or heal themselves, but each turn resting will move the time counter forward to the next counter-attack from the enemy or a new event, that will change the conditions of battle and/or add 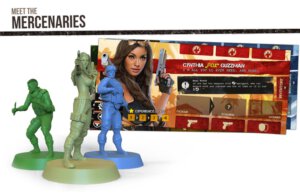 extra side missions to solve. Players have to manage the different threats and missions while advancing their main goal on the map, which changes with each scenario.

Mercs take their gear, allies and experience with them through the campaign, continually improving their mercs.

​Players can gear up and improve mercs, free sectors from occupying forces to receive cash and better gear, save grateful civilians to man your militia or stumble into roaming bloodcats as you try to fight Deirdranna’s nefarious commanders and their plots, which will escalate the more sectors you liberate.
​
The game uses elements from combat games such as Dark Souls, Imperial Assault or Conan and adds more tactical player decisions and influence such as terrain and cover and different, evolving enemies as well as new merc skills and tons of gears and weapons and a meta gameplay managing your militia and defending your hard won sectors.