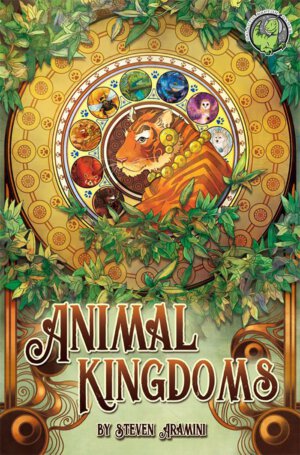 Following a successful Kickstarter run, Galactic Raptor Games are about to release their first game title. In Animal Kingdoms, players will vie for supremacy as they play various cards to different territories in order to gain influence. Whoever holds the most influence in the end wins. The game is for one to five players, ages 8+, plays in around 45 minutes, and will carry an MSRP of $35.00 when it arrives on January 29th.

In Animal Kingdoms, each player takes on the role of a house leader, battling to gain control of the five kingdoms. Cards in your hand represent noble beasts that have pledged their allegiance to you. Over the course of three ages, you must deploy your beasts to the various territories – making sure that you adhere to each kingdom’s decree – to try and improve your influential position in the kingdoms. The house that gains the most influence by the end of the third age is declared the one true leader of the realm.

Animal Kingdoms is the Winner of the 2018 Cardboard Edison Award!