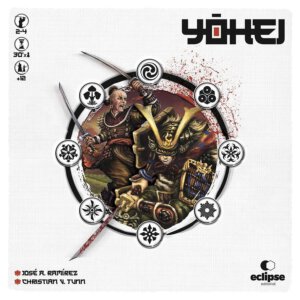 Later this year will see the release of an interesting looking Japanese myth themed wargame from Eclipse Editorial. Yohei, designed by Christian V. Tunn Cabrera and J. A. Ramírez, is a combat game where each player will lead their card based forces across modular terrain boards to do battle with rival forces. The game is for two to four players, ages 8+, plays in around 30 minutes per player, and will arrive in Q4. No official MSRP just yet.

There is a collection of books handwritten by the survivors of the first war against the demons where it’s narrated that under the island of Jiin there are two forged doors that enclose the infernal forces expelled by Arashi “the Exiled”. A hero disowned by the false emperor, who has plunged the country into a punishing civil war facing a population that awaits the return of his hero to rid them of the tyranny of a mad throne and the rumors of demons returning to win back with blood what they once lost.

Yohei is born from the combination of the mysticism of Japanese folklore with a fantasy universe created for a wargame that faces asymmetrical clans in modular boards with numerous and different game modes. It combines mechanics such as dice rolling, grid movement, variable players powers, modular boards and card management to develop our strategy during the battle by acquiring warriors, invoking powerful event cards, legendary weapons and the construction of buildings that lead us to victory in exciting games of 60 to 90 minutes.

Combine die rolling, modular boards, and card management to immerse yourself in battles fought by the warriors of your army. Construct buildings, summon powerful events, invoke legendary weapons, and crush your enemy in games that last around 30 minutes per player.

Yohei offers 1 vs 1, 2 vs 2, and 3 player free-for-all skirmishes. Additionally, for those who manage to master the game and want to delve deeper into its mechanics, you can also build your own decks with your favorite characters and events seeking endless combinations and hidden tricks among the skills, weapons and heroes of Jiin.

A good backstory provides the historical background to the feats and conflicts of the heroes of the Island of Jiin and its asymmetric clans.

Will you be the chosen one? Will you manage to subdue your enemies? 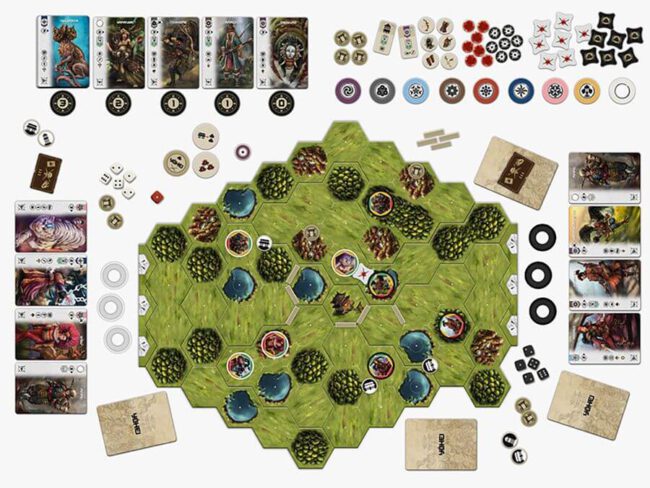