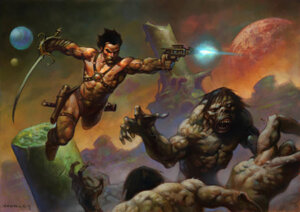 One of the most highly anticipated roleplaying games of 2018 is a week away from beginning a crowdfunding run on Kickstarter. After spending a bit of time in the planning phase, John Carter of Mars: Adventures on The Dying World of Barsoom will no doubt be the latest in the Modiphius Entertainment lineup of excellent roleplaying games. I’m hoping we see the same sort of excellent work as we did with Robert E. Howard’s Conan: Adventures in an Age Undreamed Of (you can read my review here). The John Carter of Mars Kickstarter will launch mid-day on January 8th and I’ll bring you the latest pledge level and stretch goal info once it’s available.

John Carter of Mars – Adventures on The Dying World of Barsoom is a planetary romance tabletop role-playing game. We’ve created it in under license and with the cooperation of the estate of Edgar Rice Burroughs, author of the original Barsoom novels and with the guidance of Scott Tracy Griffin one of the leading scholars of his works to ensure utmost authenticity. Using a pulp-action inspired lite variant of Modiphius’ 2d20 system called Momentum, John Carter of Mars allows players to take the role of various adventurers and heroes as they travel, battle, and romance their way across the a wondrous and dangerous world known to its natives as Barsoom. Play as John Carter, the princess Dejah Thoris, the fearsome Thark Tars Tarkas or you can create your own new heroes from a wide variety of options.

Included in this book are:

​”I do not believe that I am made of the stuff which constitutes heroes, because, in all of the hundreds of instances that my voluntary acts have placed me face to face with death, I cannot recall a single one where any alternative step to that I took occurred to me until many hours later.” – John Carter, Princess of Mars
Tags
Gaming News John Carter of Mars Adventures on The Dying World of Barsoom Kickstarter Modiphius Entertainment RPGs Tabletop Gaming
Show More
Share
Facebook Twitter LinkedIn Tumblr Pinterest Reddit VKontakte Odnoklassniki Pocket Share via Email Print