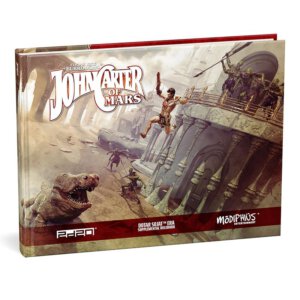 Modiphius Entertainment has released the latest sourcebook for the John Carter of Mars roleplaying game. The Dotar Sojat Era Supplemental Rulebook covers the period of Martian history as written by Edgar Rice Burroughs in A Princess of Mars. The 137 page supplement is available right now in hardcover from Modiphius (including the PDF) for $36.36 or in PDF alone at DriveThruRPG for $19.99.

Narrator advice on using the themes and tone of the era and the plots of A Princess of Mars to create exciting Dotar Sojat era campaigns.

New narrator characters, those most beloved and despised of the era.

New strange technology, powers for your players to acquire and mysterious places of the Dotar Sojat era to explore, all packed with plot seeds to inspire narrators.

Expanded rules for airships and using them in battle, rules for designing and building your own vessel, and a selection of pre-made ships for player and narrator convenience.