This July will see Paizo Inc and WizKids team for another wave of Pathfinder Battles pre-painted miniatures. The upcoming adventure path Agents of Edgewatch will provide the inspiration for the sculpts. These minis will be sold in the usual WizKids blind booster packaging.

In July, we’ll be launching our third Pathfinder Adventure Path for Pathfinder second edition, the fantasy cops-and-robbers Agents of Edgewatch, in which the players all take on the roles of members of Absalom’s city watch coming together to address a city-wide threat. It is fitting, then, that we include some members of said watch in this set. We put as many of these figures in the set’s variable slots as we could, allowing the same sculpts to be altered slightly to increase the total number of players who might find just the right one to represent their character. We had our concept artists design a series of uniforms for the watch so that we could maintain visual consistency between the forthcoming books set in Absalom and these minis, so be sure to let us know what you think of the new watch uniforms! Here we have two versions of the Absalom Watch Cadet, two Medium figures at the common and uncommon rarity, respectively.

We don’t yet know when or how we’ll be distributing it, but we’ve also got a promo repaint of the human version of this figure coming later, with a darker skin tone (perhaps of Keleshite ancestry).

Slightly higher in rank, the Absalom Watch Officer comes in two varieties at the uncommon rarity, both Medium (human) figures.

Rounding out this series of city watch members, we have the Absalom Watch Captain, a Medium rare figure.

While city watch members can really bring any campaign world to life, we didn’t just infuse Pathfinder Battles: City of Lost Omens with one flavor of Absalom. After all, it’s the world’s largest city. We pulled out all the stops to ensure the setting’s cosmopolitan nature was reflected in this set.

Take Chief Zusgut, for example. This Small rare figure represents the most influential goblin in Absalom, whose dominion over the Puddles is (mostly) absolute.

Absalom’s naval supremacy in the Inner Sea is undisputed, in large part due to two forces working to protect the city’s harbor and nearby waters. The first are the hippocampus-riding Wave Riders, while the second are the amphibious humanoids known as the Low Azlanti. Depicted here are the Large uncommon and Medium common figures for each of these two iconic Absalom natives.

Finally, in keeping with our tradition of including relevant deities from the Pathfinder pantheon in Pathfinder Battles sets, we knew we couldn’t do a set based on Absalom without including the remaining ascended gods. Thus, we have Aroden, founder of Absalom and currently very dead, and Norgorber. Check back over the next few weeks to see a few figures themed to the faiths of both of these gods! Both rare Medium figures, Aroden and Norgorber are sure to add a touch of the divine to any campaign.

And, if you’re looking to let your player characters potentially become gods, you’ll definitely want to pick up our first piece of set dressing: the Starstone! Based on the illustration from the cover of Lost Omens Gods & Magic, this Medium bonus figure promises apotheosis to all who touch it and survive the ensuing ordeal. 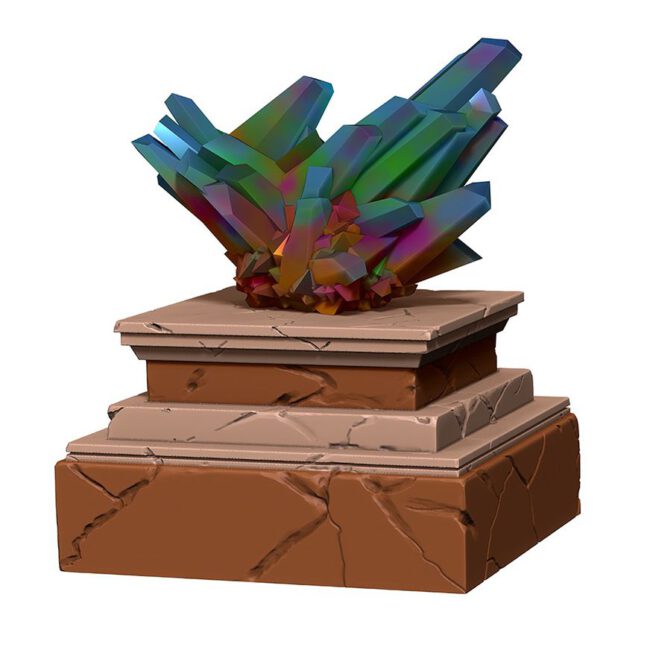