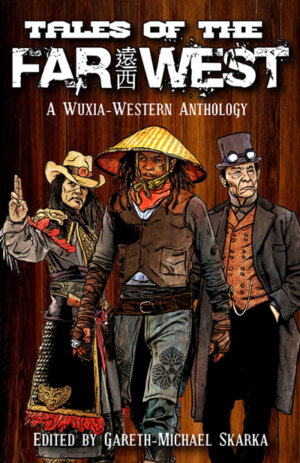 Most GMs, DMs, Keepers, and what have you are always looking for the next interesting setting in which to run a game (or at least run across something from which to mine story nuggets) and it looks as if Tales of the Far West might just scratch an itch. This anthology looks like it could make for some interesting reading as it introduces gamers to the setting of the new role playing system Far West, from Adamant Entertainment!

Imagine: A fantasy world, but not one based on Medieval/Dark Ages European culture and myth, but rather on the tropes of the Spaghetti Western and Chinese Wuxia. Add steampunk elements. Mix well.

A fantasy world that mixes the inspirations of Django and Crouching Tiger, Hidden Dragon… The Good, The Bad & The Ugly and House of Flying Daggers… Fistful of Dollars and Fist of Legend.

A fantasy world that’s explored through a book series, a constantly-updated website, a tabletop role-playing game, comics, artwork, webseries and much, much, more.

This is FAR WEST.

Tales of the Far West is the first book in Adamant Entertainment’s Wuxia-Western mash-up, featuring a dozen all-new tales written by critically-acclaimed and award-winning fantasy, science-fiction, horror and adventure authors, including:

The short story anthology Tales of the Far West is now available, in print and digital format from the official FAR WEST webstore, as well as Amazon.com (paperback and Kindle), Barnes & Noble (Nook), and other sites.