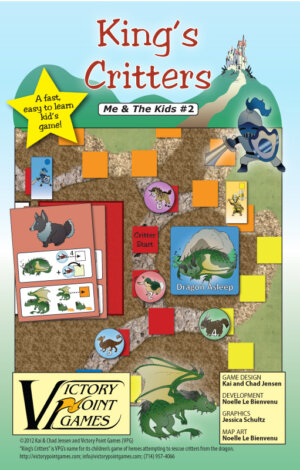 Victory Point Games has released the second game in their Me & the Kids line of introductory games. This series is a great way to share your love of gaming with the little ones and prepare them for a lifetime of gaming goodness. The new title, just out,  is King’s Critters!

The second game in our kid’s game line, King’s Critters, is a 2 to 4 player game designed by Kai Jensen and Chad Jensen. For many years, the King’s Royal Zoo has housed an odd collection of exotic Critters from across the kingdom. Only now, the Zoo is empty. A Dragon has been sleeping for centuries beneath a nearby mountain and has recently awoken. Intrigued by the King’s menagerie, the Dragon has stolen all the Critters from the Zoo and taken them back to its lair!

You and your fellow adventurers have answered the King’s call for help and volunteered to enter the Dragon’s lair to rescue the Critters, with the promise of great rewards for your efforts. The more Critters you bring back, the greater the reward.

Carrying a Magical Cart for your journey, how many Critters can you rescue? Sneak around the sleeping Dragon, and be careful not to wake it as you attempt to capture the King’s Critters!