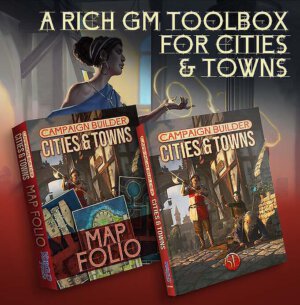 Kobold Press has a new 5E DM’s supplement up for crowdfunding. Campaign Builder: Cities & Towns provides plenty of tools for you to create interesting locations for your player characters to use as D&D adventure locales and bases of operation. The project has already passed its funding goal and you can reserve a copy of the hardcover (with PDF and Roll20 digital assets) for a $44.00 pledge or grab the PDF and Roll20 goodies for a $29.00 pledge through June 10th. Expected delivery is March 2023.

From Lankhmar to Minas Tirith, from Waterdeep to Zobeck and on to King’s Landing, cities and towns have always played a pivotal role in fantasy games and stories.

Campaign Builder: Cities & Towns provides a complete toolkit to create, expand, and enhance the cities and towns in your 5th Edition game, whether you are running an established setting or working with an original or homebrew setting. From guilds to temples, and from useful NPCs to wild tables of plots and rumors, Campaign Builder: Cities & Towns strengthens and expands your game’s world immediately.

In addition to the Campaign Builder hardcover and PDF editions, this Kickstarter will fund the creation of the Cities & Towns Map Folio of 10 wet/dry-erase battle maps, a Roll20 VTT edition for digital play that includes those maps and all the monsters and NPCs (included with all pledges at no extra charge!). This last element marks the first time Roll20 has made it possible to offer a “buy the book, get the Roll20 version included free”—so you don’t pay twice for the same content in different formats!