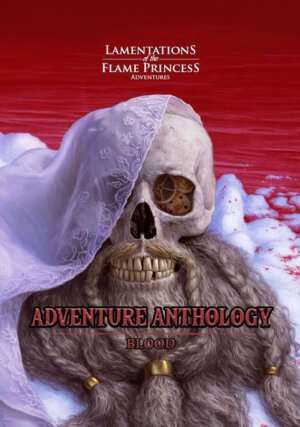 The final entry in the trilogy of early adventure anthologies has arrived for the weird fantasy OSR Lamentations of the Flame Princess roleplaying game. Adventure Anthology: Blood contains four complete adventures as well as supplemental material to aid running the tales. You can score the 350 page PDF for $19.99 at DriveThruRPG.

The classic early Lamentations of the Flame Princess adventures, where the Weird was a spice to put on traditional gaming fantasy, are finally back in print with this final anthology in the Blood Fire Death trilogy!

* The Grinding Gear A dungeon-builder with a peculiar hate for adventurers has created the ultimate challenge. Can you find the treasure and still survive?

* Hammers of the God The lost shrine of the dwarfs has been found! You’re not ready for the secrets found within…

* No Dignity in Death: The Three Brides A trilogy of tragic adventures all about love and loss.

Presented with all new graphic design and cartography, and generously illustrated with over 250 pieces of new art!

For use with Lamentations of the Flame Princess Weird Fantasy Role-Playing and other traditional tabletop role-playing games.