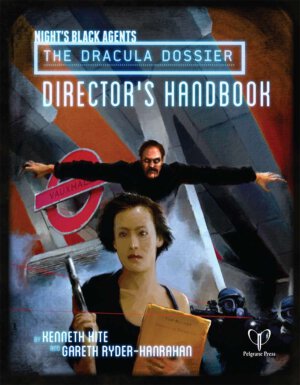 The award winning horror RPG campaign The Dracula Dossier, from Pelgrane Press, is the focus of the newest Bundle of Holding. You can jump into the Night’s Black Agents adventure, written by Ken Hite and Gareth Ryder-Hanrahan, starting at $19.99. Score these savings through November 1st and ten percent of your payment (after gateway fees) will be donated to the charity designated by Pelgrane Press co-owners Cathriona Tobin and Simon Rogers, Cochrane Reports.

In 1893 a visionary spymaster in the British Naval Intelligence Department tried to recruit the perfect asset: a vampire. Operation Edom contacted Count Dracula in Transylvania, set up a safe house and headquarters in England, and arranged transit. Then it all went wrong. Dracula betrayed his minder and double-crossed NID. British intelligence hunted him down on his home ground and terminated him with two knives and extreme prejudice — or so they thought. Dracula lives. Now it’s up to you to finish the job.

Funded by a spectacular November 2014 Kickstarter campaign, the Dracula Dossier series follows in the fully improvisational path of the award-winning The Armitage Files campaign for Trail of Cthulhu. Players follow leads in the margins of Dracula Unredacted, a rare edition of Bram Stoker’s masterpiece that reveals the terrifying truth behind the fiction. Players choose which leads to track, which scarlet trail to follow. The Director, using the clear step-by-step techniques in these ebooks, improvises a suitably blood-soaked thriller in response to their choices. Together you create your own unique story — and you learn why Ben Riggs at Geek & Sundry called The Dracula Dossier the greatest RPG campaign of all time.

This comprehensive offer once again brings you the entire Dracula Dossier line. For just US$$19.95 you get all three titles in this revived offer’s Agent Collection (retail value $$54) as DRM-free .PDF ebooks, including the Night’s Black Agents core rulebook (retail price $25), Dracula Unredacted (retail $20), and The Edom Field Manual (retail $9).

And if you pay more than the threshold price of $$30.16, you’ll level up and also get this revival’s entire Director Collection with six more titles worth an additional $$80, including the indispensable Dracula Dossier Director’s Handbook (retail $25), plus the Dracula Dossier Deck of nonplayer character cards; The Edom Files (retail $16) scenario collection; The Hawkins Papers (retail $17) with over 30 beautiful player handouts; The Thrill of Dracula, Kenneth Hite’s analysis of Dracula portrayals in novels and films; and The Van Helsing Letter, a free quickstart adventure Pelgrane Press distributed for Free RPG Day 2016.

Superhero RPG Amazing Heroes is Out in Print and PDF