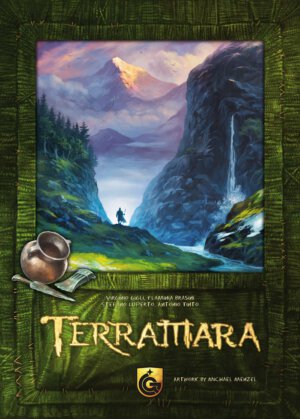 An interesting looking Bronze Age era game is now available from Quined Games. In Terramara, players will attempt to lead their clans as they explore new areas of Northern Italy and aim to advance their people’s technology. The player whose clan makes the biggest impact on history is the winner. The game is for two to four players, ages 12+, plays in around two hours, and carries an MSRP of $60.00.

Terramara, or black earth, refers to the shared culture of a tight-knit network of villages in Northern Italy, founded during the mid to late Bronze Age (around 1500 BC). The inhabitants of this marl-rich land lived, traveled and traded in an area between the Alps and the river Po. They were hunters and farmers, but also practiced metallurgy, casting bronze tools in stone molds. While the dark (black) soil in the region was dry enough, they still built their houses on piles, suspended in the air by wooden stakes. The reason for this seemingly pointless practice, as well as the origin and fate of the Terramara people, is unknown and remains a topic of fierce debate among present-day historians.

In Terramara, you are the chief of a clan occupying one of these villages. Your goal is to develop your clan while exploring lands farther away to trade and to reach sacred places. As the density of settlements is ever-growing, you will face some stiff competition from other clan leaders. To best them you must improve your battle strength and discover new technologies to create useful artifacts. The player who develops the best clan by gaining the most development points, will become leader of Terramara and wins the game!