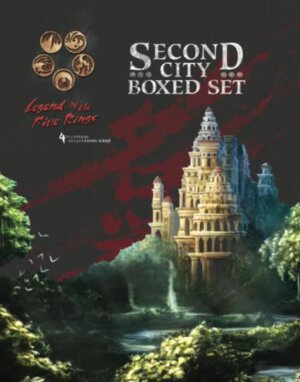 Fans of the Legend of the Five Rings RPG, from AEG, will be excited to learn of a new box set on the horizon which will feature the Second City. No, we’re not talking about Chicago folks but the fabled Second City in the land of Rokugan! This set will include all you need to know about the city as well as a full campaign and is scheduled for an August release.

The untimely death of a prominent magistrate in Rokugan suddenly elevates a group of simple samurai to a position of authority, but the magistrate’s unfinished business sends them to the Second City to see it to completion. There, influential samurai from the Empire have almost limitless potential, but the distractions from duty are numerous. In the Second City, will honor prove stronger than steel?

This boxed set for the Legend of the Five Rings Roleplaying Game 4th Edition features a complete sourcebook on the Second City, including information on the Colonies beyond its border, the various individuals, groups, and agendas that comprise the Governor’s court, a poster-sized map of the Second City, and a complete campaign that brings characters from a position as minor deputies in the Emerald Empire to major players within the Colonies