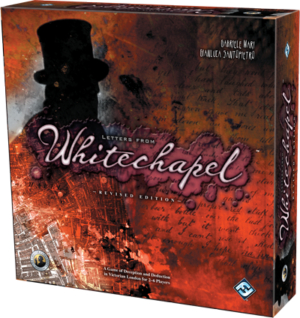 It’s been a long time coming but Fantasy Flight Games has finally released the new edition of Letters from Whitechapel. Designed for up to six players, one takes on the role of Jack the Ripper as the other gamers pursue the infamous serial killer before it’s too late.

The game is currently available for an MSRP of $49.95.

A lone detective moves swiftly through the darkened alleys and back streets of the Whitechapel District. A chill works its way through his body, though the night is not terribly cold. He can feel a presence before he can make out the shape of a man in front of him. The man turns a corner. The detective follows. He is surprised to find the man facing him, and he stops suddenly. The man tips his hat and smiles. For a moment, they just look at one another, killer and cop, sizing each other up…

The letters have gone out, and the Ripper returns! Letters from Whitechapel is now available at your local retail store. Experience all the terror of Whitechapel district at the end of the nineteenth century in this engrossing game of cat-and-mouse between the seasoned London detectives and the most cunning murderer they ever faced.

In Letters from Whitechapel, one player will take the role of Jack, and up to five others will control the movements of a few policemen and investigators as they scour the tortuous streets of the worst part of London. Over a series of four rounds, Jack strikes out each night, and claims the life of another victim.

Deduce the Path and Hideout of the Killer At the beginning of the game, Jack chooses a secret hideout somewhere in Whitechapel district that he can retire to after committing his dastardly deeds. Each night, Jack commits a murder, and removes the Wretched pawn at the location of the murder. Now, the night explodes into action, as Jack races unseen to his hideout, and the investigators close in, hoping to cut him off, and trap the murderer.

The detectives must send out patrols and work together to defeat the threat of the Ripper, as Jack moves invisibly through the alleys and byways of Whitechapel. Eventually, the policemen will be able to track Jack further every night, closing in on his hideout and finally capturing him, but if they fail to catch him within four rounds, the game is over, and Jack the Ripper escapes unconvicted.

Immerse Yourself in the Historical Horrors

Crafted with painstaking historical detail, Letters from Whitechapel has been expressly designed to make the board game an accurate representation of historical events. On the bloodstained city map of Whitechapel district, streets, important locations, and the sites of Jack’s murders are laid out corresponding to reality. Fascinating historical notes on the game board, and in the rulebook add to the horrific aura surrounding the actions of the serial killer.