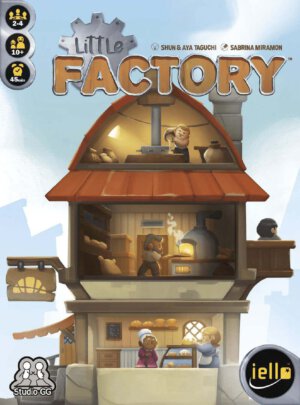 An interesting looking reskin of the game Goods Maker is coming soon from Iello. In the upcoming Little Factory, designed by Shun Taguchi and Aya Taguchi, players will compete to gather resources, build buildings, and create combos in this light engine building design. The game is for two to four players, ages 10+, plays in around 30 minutes, and will carry an MSRP of $19.99 when it arrives in November.

Little Factory, first released as Goods Maker, is a resource management and building construction card game for 2-4 players with a playing time of about 30 minutes.

Players increase their assets by processing resources into other resources, such as turning wood into wood or charcoal, or turning charcoal and flour into bread. If you increase your assets, you can build a building and use that building to acquire resources and victory points more quickly.

The more buildings players construct, the more actions that become available on future turns. On a turn, players take one of two actions:

Production: Choose a resource card or building card in the production action area, and gain the item shown on it; or,

Trade: Discard resource cards from your hand to acquire resource or building cards of the same value or less from the available cards.

In addition, players can use the effects of each building they own once per turn (including on the turn during which they were acquired). An example of a building effect is: exchanging a thread card in hand for cloth available in the play area. Chain together cards, buildings, and actions to create more victory points. The player who collects 10+ victory points first wins!

Family Friendly Board Game Little Town has Arrived from Iello

Iello to Release For the King (and Me) This July