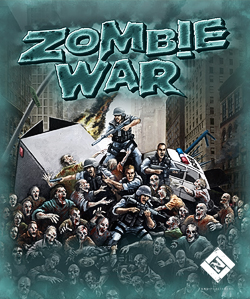 Zombie War takes the zombie menace global. Infected individuals made it into several major cities before the airports were shut down, and all hell breaks loose. Players have to take the role of civilian governments trying to keep the populace calm, military forces trying to eliminate the threat by force, corporate interests trying to profit from the situation, and of course, someone is playing the zombies. Zombies are a global epidemic, and Zombie War maintains the chaos factor by letting players:

Zombie War from Lock n’ Load Publishing looks at a war against zombies on a strategic level. Instead of lone survivors battling it out at the mall, it is an international scale, with players managing the global response to an unknown threat. The idea of a strategic level plague game is nothing new, from older titles like the recently re-issued print and play Black Death (BTRC) or the conventionally printed Pandemic  (Z-Man Games), but it has not been done with a uniquely zombie motif.

Zombie War includes a 17 x 22 map, a set of 18 cards with turn roles, victory conditions and player aids, and a sheet of 88 counters. The map is semi-abstract, using area-based movement between major world population centers, trade hubs or points of economic or political interest, connected by lines representing the difficulty of zombies shambling their way from one spot to another. So, the New York City-Washington DC route is minimal difficulty (1), while the Los Angeles-Honolulu link is maximum difficulty (4)… Even routes like the latter are possible, zombies being an inventive bunch, stumbling into shipping containers and so on. And all it takes is one zombie to invade a region… 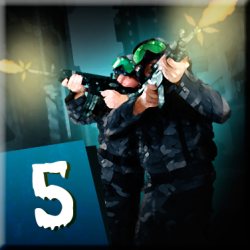 A global game of people vs. zombies would be fairly straightforward, and honestly, not all that interesting nor a very good simulation. There are a number of things that add to the excitement in Zombie War. A situation like a plague of zombies would generate many different military, civilian and business responses, both in a real-world and typical zombie fiction sense (think of the Umbrella Corporation in Resident Evil). In Zombie War, each player takes on the role of Government, Military, Corporate or Zombies. However, each player plays a different role each game turn, passing their role to the right after each round of play.

In a two or three-player game, a player may have multiple roles in a single turn, but since the roles rotate, the total actions per player will average out to be the same. The government wants to keep people calm and find a medical answer to the problem, the military wants to halt the spread by any means possible (preferably violent), the corporate player wants to isolate the zombies for experimentation (and profit) and the zombies just want to spread. The points a player gains through game actions accumulate regardless of which role they are playing on a turn, but your  take on what the military should be doing about the threat may be different than the previous military player, and at cross purposes with the next  military player. Each role gains points for different things, and has certain unique actions that affect the other roles. For instance, the government player can adjust the global “threat level”, which determines the severity of military response allowed, but the government  player gets points for leaving the threat level as-is or lowering it (“the problem is contained, the public is encouraged to remain calm…”), which is not necessarily what the military  player wants. In addition, each player has two secret victory conditions, one based on a role, the other based on a region, each with a minimum point score required. So, regardless of what else you do in the game, you might be trying to get at least 12 points and clear the world’s financial capitals of zombies, or trying to set up a defended human stronghold in China, and you win if you achieve either of these before any other player reaches one of their goals.

So, not only do you have to keep the world from being overrun by zombies (unless you have the Zombie victory condition!), you need to play in such a way as to not reveal your victory condition prematurely. The combination of rotating roles and secret victory conditions makes the response of each faction consistent in their intent, but chaotic in implementation.

The goal of the design is to take a classic horror meme and address it as a real-world epidemiological problem, using the game mechanics to both simulate the crossed wires of different global power structures in response to a crisis and  contribute to the victory criteria for each player. It is designed to be simple enough to appeal to the typical player of Eurogames and a 3-4 player game, but to have the heart of a genuine strategic game and be playable just as well in a 2-player mode. 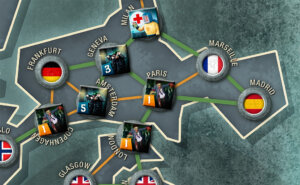 Designed by Greg Porter, Zombie War looks at a war against zombies on a strategic level. Instead of lone survivors battling it out at the mall, it is an international scale, with players managing the global response to an unknown threat.

Like zombies (who doesn’t?) you might want to check out All Things Zombie or Run, Fight, or Die!